Check out the demo: https://revanurambareesh.github.io/blog/ttt/ttt

Check out the code: https://github.com/revanurambareesh/mdp-tic-tac-toe

Reinforcement learning is particularly compelling because of the flexibility it offers to model environment’s stimulus and response. In this post, we shall create shall teach an agent to play Tic Tac Toe by continuously learning by playing against itself. There are many ways to achieve this, including minimax tree and

. These methods model tic tac toe as a game as if it is playing against a perfect player. We shall instead assume that players are imperfect and learn to play the game by playing lot of games against itself.

Note: We are assuming reward can be calculated by playing a move and anticipating opponents move. We calculate rewards separately without exploiting symmetry.

We shall model reinforcement learning problem in following fashion. For every action the agent takes, the environment rewards (or penalizes) the agent and it transitions from one state to another as a consequence of action.

This can be achieved when the agent learns a policy

which determines what action

the agent has to take in the given state

Now mathematically we can define value function as,

To learn playing tic tac toe, we shall define

We define the state as a string of values containing the markings in 9 positions. Each move corresponds to an action which is represented as a  number indicating the index. 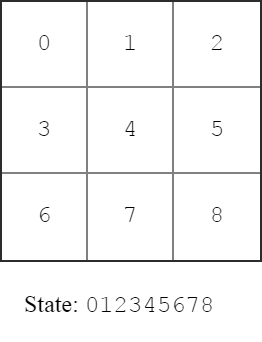 For every move a player performs an action and state of tic-tac-toe board changes. Following figure shows sequence of actions taken and state of the board.

Since there are two players we will  have to learn separate policies for player ‘X’ and player ‘O’.

Rewards $R$: Winning player receives a reward of 100 and losing player will receive a penalty of -100. We shall also reward the player who makes a move that prevents the opponent from winning in next step, a small positive reward.

When training the model we assume that both players are dumb and hence we use random policy to start playing the game. To keep the implementation simple, we shall assume that players are dumb throughout the training phase and policy is decided based on the rewards gained by the agent in that state.

Using numpy in python and React Js for front end we shall develop this game. Here are the data structures that store the states and policy.  Following is the state object snippet extracted from ttt.py. See the repo for full implementation.

State descriptor is a string of length indicating current moves played in the game. ---------. Every state has set of actions

associated. In the state object,

. Qvalue_Frequency is a tuple stores sum of rewards accrued and number of times the action was taking when the model is being trained. self.policy (

)is a integer that indicates the action that has to be taken when in the given state for maximum reward.

Calculation of perceived reward for a given state

in a given state

The above equation states that v is sum of all normalized discounted rewards for a policy pi. Best policy pi* would however encourage the agent to take actions for which the perceived reward is maximum in which case, the agent will take an action a in a given state.

The above equation can be re-written to describe perceived value at a state with best policy pi*.

This equation can be further simplified in case of tic-tac-toe. At the given state, when the agent takes an specific action, it moves to a specific state. That is,

And all other transition in this state --------- and for the given action a=0 will have a transition probability of 0. Therefore,

Therefore value function can be simplified as,

In this game both players are playing against each other and each player will keep track of rewards gained as the consequence of their move. A win for a player is loss for the opponent. Therefore reward is backtracked to all visited states in the game at the end of game.

After multiple such episodes, for every state the agent computes the best action by taking average of rewards accrued for all possible actions. Best action is the action that corresponds to maximum average reward.

View all posts by R.A.